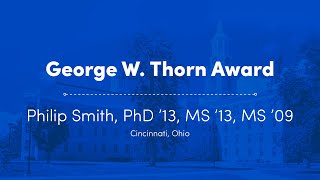 More about the award>

Phil Smith grew up in a health-conscious household with parents who taught the benefits of a nutritious diet and regular exercise. An athlete, Smith saw the advantages of good conditioning in his performance on the field. Off the field, he also gained an awareness that making poor health behavior choices contributed to suffering at the individual and community levels.

“The quality of mentorship, opportunities to conduct cutting-edge research and the emphasis on career preparedness were outstanding. ”
Phil Smith, PhD, MS, MS

After completing his undergraduate study, he knew he wanted a career in promoting health and applied to both medical school and a master’s program in UB’s School of Public Health and Health Professions. He was accepted in both programs and, after much reflection, determined that he could make the greatest impact with a career in public health.

“I was really interested in the research opportunities and other resources available to me here at UB and tried to take advantage of as many of them as possible,” said Smith. He earned a master’s in epidemiology in 2009 and decided to further his education with a doctoral degree in community health and health behavior at UB.

"This program was exceptional," he said. "The quality of mentorship, opportunities to conduct cutting-edge research and the emphasis on career preparedness were outstanding."

Through an NIH-funded grant and in collaboration with UB’s Research Institute on Addictions, Smith’s research examined the role substance abuse plays in relationships.

A 2013 graduate, Smith was a postdoctoral fellow with the Yale School of Medicine's School of Public Health and Department of Psychiatry, a position funded by the National Institute of Mental Health. "I’ll be conducting research with Dr. Sherry McKee and Dr. Carolyn Mazure, looking at gender differences in tobacco use and co-morbidity between tobacco use, other substance use and mental illness," he said.

Learn more about our PhD program