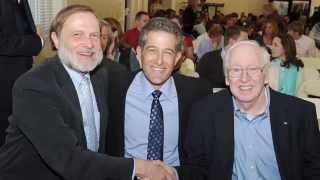 Pioneering Spirit: Building the Foundation for the Future

A prolific and accomplished scholar, administrator, author and lecturer, J. Warren Perry was founding dean of the University at Buffalo School of Health Related Professions (now the School of Public Health and Health Professions). He died Aug. 5, 2010, at age 88.

Perry came to UB in 1966 to found the School of Health Related Professions, a model for similar schools throughout the SUNY system and was the first allied health professional ever elected to the Institute of Medicine of the National Academy of Sciences.

In 1980, Perry established the J. Warren Perry and Charles Donald Perry Memorial Fund (named also for his brother Charles, professor and chair of the Department of Classical Languages and Literature at the University of Alabama, Tuscaloosa) to help establish the Western New York Wellness Works Regional Resource Center to assess, direct and research work-site health initiatives with scientific rigor and community sensitivity.

Give to the J. Warren Perry Endowed Scholarship Fund.